The publication date is in the indicia; the on-sale date is on the cover. The cover date was apparently adjusted for an expected delay due to the Independence Day holiday that did not happen.
This issue has variants: 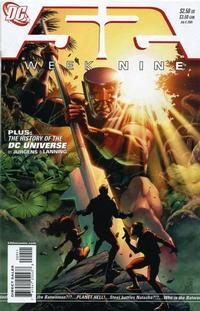 Dream of America (Table of Contents: 1)

First appearance of Batwoman, in costume, and Luthor's team of created metahumans. This team includes Natasha, Herakles, and four others unnamed characters.