The publication date is in the indicia; the on-sale date is on the cover. 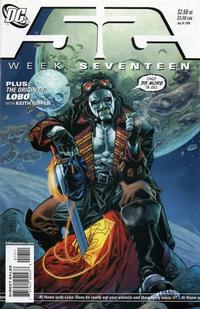 Last of the Czarnians (Table of Contents: 1)

First Line of Dialogue or Text
This exclusive footage provided to WLEX of what's being billed as Luthor's own Justice League at Dearborne Air Force Base in the North Atlantic yesterday...
Genre
superhero
Characters
Adam Strange; Animal Man [Buddy Baker]; Starfire [Koriand'r]; Eliza Harmon; Erik Storn; Hannibal Bates; Herakles [Gerome McKenna]; Jacob Colby; Natasha Irons; Red Tornado [John Smith]; Devilance the Pursuer; Lex Luthor; Lobo; Mercy
Synopsis
Week seventeen sees Luthor's team of laboratory created metahumans let loose on the followers of Kobra, and getting ready for a media blitz. In space, Adam and crew exchange being stranded on a garden planet for being stranded on a barren asteroid, where they are found by Lobo. And Red Tornado awakens in the Outback of Australia.
Reprints

The is the first time civilian identities are given for the majority of Luthor's team, and it is indicated that no code names have been issued. "Herakles" may be a nickname the group gave Gerome. Publisher has released copies of the breakdown art that indicates the codnames as: Lumina (Natasha), Ultimate Man (Jacob), Trajectory (Eliza, also refrenced as Velocity), Herakles, Omnivore (Hannibal), and Reaver (Erik). Also, the apparent death of Red Tornado in issue 5 is revisited with his mostly intact and functional head and torso showing up here.

The Origin of Lobo (Table of Contents: 2)

First Line of Dialogue or Text
Years ago, on the blissful, utopian planet Czarnia, a child was born.
Genre
superhero
Characters
Lobo
Reprints

Includes profile with "Powers and Weapons" and "Essential Storylines".