Wrath of the Devil-Fish (Table of Contents) 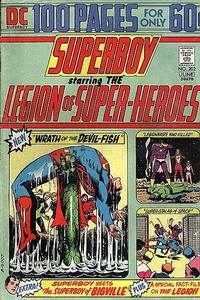 Illustration is modified version of the cover art from Adventure Comics (DC, 1938 series) #376.

Lost: A Million Miles from Home! (Table of Contents: 2)

The Legionnaire Who Killed! Part I (Table of Contents: 3)

The Spectre / promo (ad from the publisher) / 0.33 page (report information)

Part II: The Verdict of the Legion! (Table of Contents: 5)

The Super-Stalag of Space! [Part I] (Table of Contents: 7)

Tales of the Legion of Super-Heroes
Genre
superhero
Characters
Legion of Super-Heroes [Saturn Girl; Chameleon Boy; Invisible Kid; Matter-Eater Lad; Light Lass; Cosmic Boy; Duo Damsel; Element Lad; Brainiac 5]; Nardo; Blockade Boy; Weight Wizard; Plant Lad; Shadow Kid
Synopsis
Answering a distress call from Brainiac 5, the Legionnaires are captured by the alien Nardo and taken to the Super-Stalag of Space, where other heroes are also imprisoned. A Durlan who has taken on the form of Superboy, is killed while trying to escape.
Reprints

The Execution of Matter-Eater Lad! Part I (Table of Contents: 10)

The Lore of the Legion! (Table of Contents: 12)

Writing and lettering credits from reprint in Legion Archives.

The Wrath of the Devil-Fish! (Table of Contents: 13)

Job Number
B-1950
Genre
superhero
Characters
Legion of Super-Heroes [Saturn Girl; Timber Wolf; Matter-Eater Lad; Shadow Lass; Wildfire; Brainiac 5; Superboy; Mon-El; Light Lass; Element Lad]; Devil-Fish
Synopsis
A Legion team investigates an alarm at their sea-station, which is powered by a pollutant converter. Though they suspect foul play by a half-man/half-fish being, the Devil-Fish knows that aliens are plotting to use the sea-station to poison Earth's atmosphere.
Reprints

Erg-1 announces his new name, Wildfire, in this story.

The Superboy of Bigville! (Table of Contents: 14)