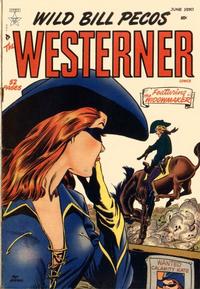 Originally credited to Mort Lawrence as Mort Leav, but they are two different Morts.

Mystery of the Missing Train! (Table of Contents: 2)

Genre
western-frontier
Characters
Nuggets Nugent; Jonah (nephew); Geronimo (mule)
Synopsis
A gang of trainrobbers have taken a train into a camouflaged tunnel to rob it.

The Farmer Goes to Boot Hill (Table of Contents: 3)

Calamity Kate Battles the Rustlers of the Lazy Bar 'M' (Table of Contents: 4)

First appearance in her own feature.

The art is similar to Krigstein's signed "Nuggets Nugent" story that it most probably is his work. Nick Caputo is uncertain of the pencils but notes the inking is clearly not the work of Krigstein as credited by the previous indexer.

From the Shadows (Table of Contents: 5)

The art is identical to Astarita's signed story "Mission Freebooter for Freedom" in Real Life Comics #53.

The Queen of Hearts Spells Death (Table of Contents: 6)

Genre
western-frontier
Characters
Wild Bill pecos; Nuggets Nugent (his pard); Molly Lownes (the 'queen of hearts'); Larry Spade (her boss; owner of a gambling saloon)
Synopsis
The Queen of Hearts was certain death to any man who listened to her.