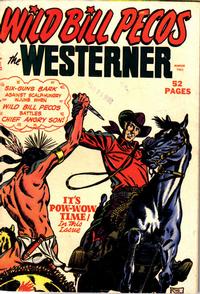 The Return of Kid Runt (Table of Contents: 2)

The art is identical to his signed cover of Kid Colt Outlaw (Marvel, 1949 series) #15. Very clean and careful brush inklines.

The bride-to-be's name changes back and forth from Kate to Betsy.

The Two-Gun Grandpappies (Table of Contents: 6)

Penciller credit from the French fan magazine Back Up #14, as submitted by Stephane Petit, via the GCD Errors list, February 2009. Possible Buscema inks per Nick Caputo.