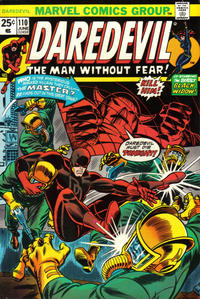 Genre
superhero
Characters
Daredevil [Matt Murdock]; Black Widow [Natasha Romanova]; Shanna; Thing; Mandrill (villain, origin); Nekra (villain, origin); Black Spectre (villains)
Synopsis
The Thing returns Daredevil to New York after their failed attempt to defeat Black Spectre. Daredevil tangles with the evil organization once again and discovers that all of their soldiers are women with strange tattoos. The Widow is brainwashed into working for Black Spectre. Daredevil discovers that the Spectre's leader is Mandrill and is told an origin story of violence and intolerance of a white boy who was black (Mandrill) and a black girl who was white (Nekra).
Reprints

A Special Announcement from Stan, Roy, and Marvel Comics (Table of Contents: 2)

Letters from Ralph Macchio (Cresskill, NJ), Grey D. Dimemna, Jonathan Burns, and Rody Miller (Gainesville, FL). The sequence opens with a long editorial about the raise in price by a nickel to 25 cents and upcoming changes in formats. Also Marvel Value Stamp No. 51 (Bucky Barnes).