First Line of Dialogue or Text
Hello, "Fancy"!!...thought I'd call on my old pal...
Genre
western-frontier 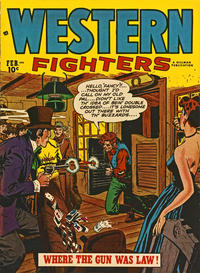 McCann is easy to recognise by his long noses, heavy shading and much black inking, like a long gloomy funeral. He also drew "The Conspiracy of Pontiac" and "Off on a Comet" in Classics Illustrated. Art ID by Steinar Ådland, March 2011.

The horses and the authentic wagons plus the hat and face of the bull whacker must be the work of Bjorklund, who drew Tex Granger for Parents Magazine, and some westerns for St.John and Ziff-Davis, like The Hawk and The Texan.

Boss of the Annabelle Lee (Table of Contents: 5)

This work, with many light pen lines, looks very similar to Dressler's credited work in Tales of Horror (Toby, 1952 series) #2.