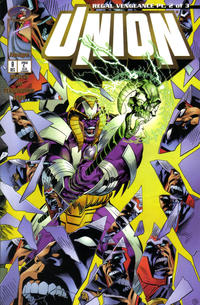 The letters page has a lengthy apology by Mike Heisler about the long delay between issues. He promises that the next three issues will be out by the end of next month and announces a contest where winners can receive a poster of the covers to last issue, this issue and next issue combined into one image. No further issues of this series were ever produced. The third part of this story was released as a one-shot called "Union: Final Vengeance" a year and a half later.