From Shaun Clancy's Facebook page, "Comics History Exchange", confirms cover inking work by Ray Osrin (September 24, 2014). Osrin was one of Matt Baker's inkers. Osrin also maintained copies of the covers he worked on the walls of his studio. Included in a picture of the studio (owned by Clancy and posted to this Facebook page) was this cover. Originally inks were credited to Matt Baker due to his signature on the cover. 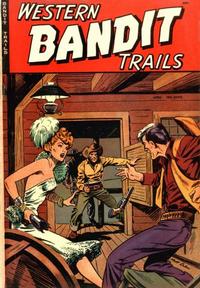 The Last Ride of the Masked Mavericks (Table of Contents: 2)

Genre
western-frontier
Characters
Lon Hooper (Marshal); Tina Allen; Smoky Curran (maverick rider); Steve McBurney (maverick leader)
Synopsis
The Marshal reckoned there must be a reason why the masked mavericks singled out Eagle Springs for their ruthless raids, but no one would agree until he revealed a clue to the shooter who used deadly silver bullets.
Reprints

This artwork is very similar to Charles Sultan, as can be seen in Blazing West #18, Buffalo Belle. Sultan also had the Jinx Jordan story in Crime Reporter #1, so it is likely that this is him too.
JVJon at DCM has credited this story to Warren Kremer, but compared to a signed Kremer story, Frisco Mary in Crime Must Pay the Penalty #3, that is not very likely as Kremer's work looks more like Elias or Robbins, with more inking than this.

Art credits are uncertain, but it looks like Astarita's work on Kaänga in Jungle Comics.
JVC at Digital Comics Museum has both Al Plastino and Astarita as artists.

Artwork similar to original art at Jerry Bails' Who's Who.

Blood Blazes a Trail to Texas (Table of Contents: 8)

JVJon at Digital Comics Museum credits this stort to Palais, and comparing with an original from Jerry Bails' Who's Who, it matches fine with the somewhat crude faces and hands. Art ID by Steinar Ådland, March 2011.