The Ghost Spider of Death!! (Table of Contents)

Pencils
L. B. Cole (signed as

First Line of Dialogue or Text
Have you ever wondered why wickedness and evil remain in the world?
Genre
horror-suspense
Keywords
spider; web 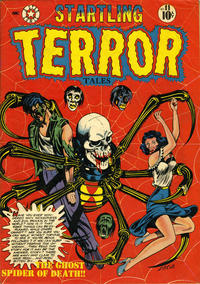 The Ghost Spider of Death!! (Table of Contents: 1)

Art identification based on Battefield’s signed stories from Super-Mystery Comics #v6#6 (July, 1947), Western Crime Busters #8 (December, 1951), and Crime Mysteries #1 (May, 1952). Similarities include the light shining from light sources being drawn as spiky circles, onomatopoeia drawn as bold black letters with exclamation points, and faces drawn with simplistic details, unless it’s a close-up. Battefield is also particularly keen on shading scenes, with him not only shading characters’ backs in a distinct way, but also their faces, occasionally to the point of obscuring them with shadow for dramatic effect. He also tends to draw the antihelix of the ear either with what resembles a regular “S” or a backwards “S“, and shade hair with squared blotches resembling stacked lines.