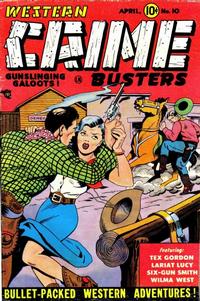 Wood may be credited in the pulp magazine.

Maxon is best spotted by his pointed noses high up on the face.

Robert McCarty is credited on pencil and ink for Trojan Comics by Jerry Bails' Who's Who, who spells his name Mc Carty and Mc Carthy.

Reprinted from the Six-Gun Western pulp for August 1950.