Cover credits were Irv Novick for both pencils and inks; changed to Bob Montana as he signed it (2008-06-11 by Allen Ross based on an Error Report). 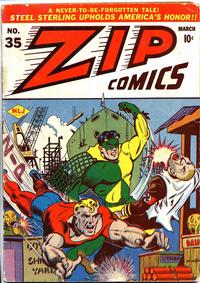 The Web and the Book (Table of Contents: 2)

First Line of Dialogue or Text
It was only a book!
Genre
superhero
Characters
Web (John Raymond); Prof. Andive (book collector); Mr. Whithers (store keeper); William Foster (ex-convict); Warden Flick (villain)
Synopsis
A book collector is murdered for an old book, and the trail leads to an ex-convict, and then to the warden himself.

The Paralyzed Thumb (Table of Contents: 3)

Dame of Fate (Table of Contents: 4)

First Line of Dialogue or Text
Ha! Ha! What fools these mortals be!
Genre
superhero
Characters
Black Jack [Jack Jones]; Judy [Vivienne]
Synopsis
Black Jack is taken back in time to the French Revolution and the Guilliotine.
Reprints

First appearance of Ginger, which would continue as an Archie feature until 1954. Hillwood High plays MLJ Sub-Normal Academy and its Coach Silverkleit in a football game, a reference to publisher MLJ Comics and co-founder Louis Silberkleit. (Unclear if character name is typo or pun on athletic cleat.) Ginger's last name is originally spelled as "Snap" in this story before evolving to "Snapp" in future stories.

Inside the signature square is another name not readable.

First Line of Dialogue or Text
When the lights of Europe are once again kindled...
Genre
non-fiction; war
Characters
Marshal Semyon Timoshenko
Synopsis
The story of a Russian Marshal fighting the German army.

First Line of Dialogue or Text
The flower pot plant shapes its leaves into a pot-like form that holds its own roots.
Genre
non-fiction

The Tale of Hugh Sinclair (Table of Contents: 10)

First Line of Dialogue or Text
Listen, Americans, the wheels of industry are humming, singing out a tune in the key of "V."
Genre
superhero
Characters
Zambini (magician); Hugh Sinclair (profiteer)
Synopsis
A tale of Hugh Sinclair, one of those despicable men America can do without, and to whom profit means more than help winning the war