Sealed pack of Wildstorm Gallery trading cards are bound into the comic.
This issue has variants: 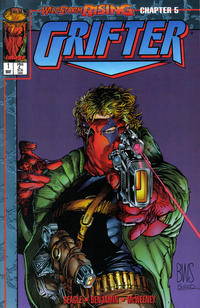 Genre
superhero
Characters
Grifter; VILLAIN: Defile; CAMEO FLASHBACK: Max Cash; Team 7 [Backlash [Marc Slayton]; Deathblow [Michael Cray]; Wraparound [Stephen Callahan]]; Zealot
Synopsis
Since the WildC.A.T.S have allied themselves with the Daemonite, Hightower, Grifter leaves the team and is on his own when he is attacked by a horde of Defile's forces.
Reprints