You Can't Run Away From Love (Table of Contents) 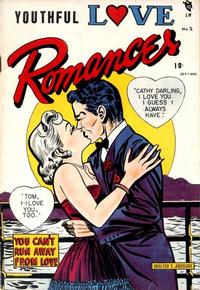 You Can't Run Away From Love (Table of Contents: 1)

Genre
romance
Characters
Cathy Rains; Nick Carney; Ida; Tom Matthews; Aunt Hagar; Mr. Haskins; Charley; Cardon
Synopsis
Cathy runs away from her cruel aunt and gets a job as a chorus girl in Nick’s nightclub. She becomes his girlfriend but learns he’s actually a blackmailing gangster. She decides to leave him, but he’s shot to death in her presence. Cathy moves away and gets a job in a resort hotel, where she and Tom fall in love. However, on her wedding day she’s questioned by investigators about Nick, and Tom is angry. He eventually decides he doesn’t care about her past and they are reunited.

Afraid to Love (Table of Contents: 2)

Genre
romance
Characters
Laura Crain; Terry Neil; Janie Day; Dave Burnette
Synopsis
Laura refuses to marry Terry because he’s a professional race car driver and her father, who was also a race driver, was killed 10 years before in a race. She gets a job in a department store and dates her stuffy boss Dave. However, when she sees Terry crash during a race, she realizes she loves him, not Dave. They reconcile.

The same story was used for "I Fell in Love with a Mama's Boy!" in First Love Illustrated (Harvey, 1949 series) 4 (August 1949). The main characters' names are the same: Terry Neal (as opposed to Neil), Laura Crain, Dave Burnette. The Harvey story is longer and adds a subplot about Dave's domineering mother, but the basic plot and sequence of events is the same in both.

Love Is Not for Sale (Table of Contents: 4)

Genre
romance
Characters
Randy Crane; Tom Barton; Ann Fenton
Synopsis
Ann loves Tom, an architect in the firm where she works, but wants to snag a rich husband. She dates wealthy Randy, who asks her to give him some documents that will allow his company to outbid hers. However, when Randy gets the papers he dumps Ann and she reconciles with Tom.

I Gave My Heart (Table of Contents: 5)

Genre
romance
Characters
Neal; Carol Grey; Jameson
Synopsis
While Carol’s fiancé Neal is out of the country on a long business trip, she crashes her car and winds up with a badly scarred face. She writes and tells Neal what happened. Carol doesn’t get a reply and when Neal returns, she goes to confront him. She learns Neal is now blind, and didn’t want to burden her. They get married. “Another operation and the doctors say my face will be good as new. As for Neal, his sight will be fully restored. It’s a miracle brought about by faith and love...”