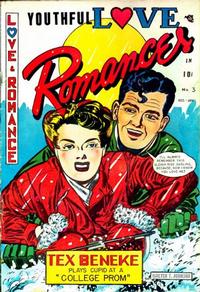 Genre
romance
Characters
Tex Beneke; Fran Fuller; Don Frazer; Joe; Lew; Buddy Basch
Synopsis
Tex Beneke and his band arrive to play at the Colton College prom. Fran twists her ankle when she meets Tex and her boyfriend Don becomes jealous when he sees Tex with his arm around her. Fran and Don argue. Tex’s drummer has appendicitis and Don is enlisted to fill in. Don and Fran reconcile.

Tex Beneke was an actual bandleader and singer; Buddy Basch was a real-life publicist, talent agent and later a syndicated entertainment writer.

Genre
romance
Characters
Jim Flagg; Laura Cottrell; Rod Stuart
Synopsis
Naval Academy midshipman Jim introduces his roommate Rod to Laura, but when Rod and Laura fall in love, Jim becomes angry. On sea maneuvers, Jim causes a collision and is put in the brig when they return to port. After Rod prevents Jim from running away, Rod refuses to snitch on his friend and is dismissed from the Academy. However, Jim confesses the truth and Rod is reinstated.
Keywords
United States Naval Academy

Genre
romance
Characters
Tom Ferris; Laura Deane; Sandra Corwin; Larry Wallace
Synopsis
Laura’s steady boyfriend Tom asks newcomer Sandra to the “Xmas Dance” so Laura attends with longtime suitor Larry instead. Suspecting Sandra is only interested in money and social position, Laura convinces her that Larry is a better catch and Sandra dumps Tom. When Sandra learns Larry doesn’t intend to marry her, she leaves him. Tom asks Laura to take him back but Laura now realizes that faithful Larry is the man for her.

Genre
romance
Characters
Jane Logan; George; Martha; Donald O'Connor; Gloria DeHaven
Synopsis
Jane wins a Hollywood contract in a beauty contest and sees it as her ticket out of her life of small town drudgery. Her boyfriend George urges her to stay but she refuses. Once in Hollywood, Jane learns the “contract” was a hoax. She works as an extra and then a waitress. George arrives and they will be married.

In one sequence, Jane works as an extra on an actual film "Yes Sir, That's My Baby" (Universal-International, 1949). Stars Donald O'Connor and Gloria DeHaven are named and caricatured in the story but play no part in the plot.