Some information for this issue from Ger Apeldoorn via the GCD Error List. 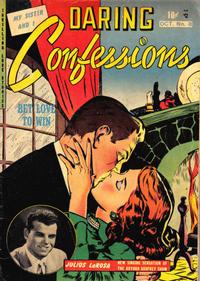 Genre
romance
Characters
Julius LaRosa; Carla Vane; Archie Bleyer; Ted Ferris; Terry Hale; Lee Gee
Synopsis
Actress Carla tries to break up the romance between her understudy Terry and Ted, the director of her television show. Carla has Terry fired and blackballed from other jobs. Ted tells singer Julius LaRosa about the situation. Julius has his fan club, the Juliettes, prevent Carla from reaching the studio in time to do her show. Terry goes on in her place and is a big hit. Carla is fired and Terry marries Ted.

Julius LaRosa (1930-2016) appeared on the Arthur Godfrey show from 1951 to 1953, and had a #1 record in
1953. He also starred in a summer TV replacement show in 1955. LaRosa was famously fired (on the air) by host Godfrey because he lacked "humility." Archie Bleyer was Godfrey's bandleader and the real-life head of Cadence Records, as shown in this story.

Genre
romance
Characters
Denny; Denny's father; Pete Slocum
Synopsis
Denny's father buys the horse "Dynamite" and she is angry at the waste of money. Her boyfriend, jockey Pete, promises to quit horse racing if the horse isn't a success. Denny poisons Dynamite's feed: Pete is blamed and banned from riding for life. He knows it was Denny's fault and they break up. Denny confesses to the racing board, Pete is reinstated, Dynamite recovers and wins the race. Pete and Denny reconcile.

My Sister and I (Table of Contents: 3)

Genre
romance
Characters
Jill Warren; Beth Warren; Tony Darrell; Matt Hanvy
Synopsis
Jill moves to the city and stays with her sister Beth. Jill sets her sights on famous designer Tony, although he's Beth's boyfriend and much older than Jill. Jill romances Tony and gets a job in his firm, certain he'll soon propose. However, new designer Matt arrives and Jill finds herself attracted to him. They fall in love, but when Tony tells Matt how Jill stole him from Beth, Matt breaks up with her. Jill apologises to Beth and reunites her with Tony.

Finger of Shame (Table of Contents: 4)

Genre
romance
Characters
Lucille Jenkins [Carol Andrews]; Will Saunders; Mrs. Green; Nancy; Mr. Vine
Synopsis
Lucille is released from reform school and returns to her home town, but her friends shun her and she can't find a job. She moves to another town and gets a sales job in a department store under an assumed name. Lucille dates her boss Will and he proposes marriage, but she is afraid to reveal her past. When some jewelry is missing during inventory, Lucille fears she'll be blamed. She's cleared of the robbery but Will breaks up with her because she didn't trust him. Lucille decides to move away but changes her mind: she gets her old job back and is reunited with an apologetic Will.

The story states Lucille was in reform school from age 16 to 19. It is never clearly stated what her crime was, although she later says it was similar to the situation she finds herself in at the end of the story (missing merchandise).