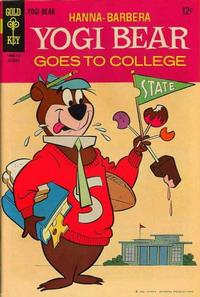 Genre
anthropomorphic-funny animals
Characters
Yogi Bear; Boo Boo (cameo); Ranger Smith (cameo)
Synopsis
Yogi is enrolled in a painting class, but after making a mess is assigned to do an outside sculpture. He chips a huge bust of himself on a hilltop, but the discarded rock chips cover a railroad track and force a train to stop. Yogi's luck holds, as there was a broken rail around a curve, so his rock pile prevented an accident.
Reprints
Keywords
college; painting; railroad tracks; sculpture; train

The dialog in the last panel in this chapter has been modified to transition to the new fourth chapter, which was originally chapter 7.

Can You Create a Monster? (Table of Contents: 7)

The Joke's on You (Table of Contents: 8)

What's Your Line? (Table of Contents: 9)

Readers to send in captions for five cartoons.

Characters
Yogi Bear; Boo Boo; Ranger Smith
Synopsis
The Dean gives Yogi a diploma early to get rid of him. He returns to Jellystone, where Ranger Smith is dismayed to find out that Yogi's degree is in forestry.
Reprints
Keywords
college; diploma; forestry

This is chapter VII in the original. Three chapters (15 pages) have been cut.

Planning Ahead (Table of Contents: 13)