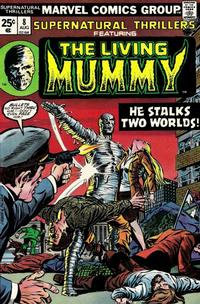 First Line of Dialogue or Text
3,000 years ago, he was N'Kantu, warrior-king...
Genre
horror-suspense
Characters
Living Mummy [N'Kantu]; the Elementals [Hydron; Magnum; Hellfire; Zephyr] (introduction); Dann (an Egyptian warrior, flashback); Garret (an Egyptian wizard, flashback); a scarlet scarab; Dr. Alexi Skarab; Ron McCallister; Janice Carr
Synopsis
N'Kantu is transported to the Elementals, four former rulers of Earth that wish to return. They make the mummy their slave and teleport him back to earth to destroy a scarlet scarab-- an ancient weapon of magic capable of destroying them.
Reprints
Keywords
monsters

The scarlet scarab, Dann the Warrior and Garret the Wizard are all homages to Dan Garrett, the original Blue Beetle.

Job Number
[V-688]
Genre
fantasy-supernatural
Characters
Bruno the Burglar; a gypsy
Synopsis
A criminal forces a gypsy to hide him from the police, but gets more than he bargained for when she does help him.
Reprints

V-688 is the job number of the original printing of this story. Confirmed by Tom Lammers and Ger Apeldoorn via the Atlas/Timely discussion group. This printing does not include any job number listing.