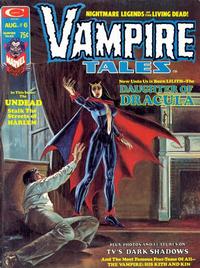 Credits, table of contents and indicia information with background image.

First Line of Dialogue or Text
What happened to the red-head?
Genre
horror-suspense; superhero
Characters
Lilith [Angel O'Hara] (Daughter of Dracula); Rich (mugger; death); Charlie (mugger; death); Martin Gold (first appearance); Mary Jane Peale (Martin's girlfriend; death); Axe Man (death)
Synopsis
A mugging is avenged. Martin Gold is arrested for murdering his girlfriend and is released because two more murders happened while he was in jail. As Martin starts to lose his grip on reality he meets Angel O'Hara and takes her to his apartment. The killer appears at Martin's apartment and tries to kill Angel/Lilith, but Lilith kills him.
Reprints

The last in a five-part series based on The Vampire: His Kith & Kin by Montague Summers.

First Line of Dialogue or Text
It's a city of people, so the song goes...
Genre
horror-suspense
Characters
Angela "Angie" Freeman (introduction; a reporter); Willie Hanson (death); Jimmy Sarran (a cop); Mr. Androitti; Thomas Freeman (Angie's brother); Mrs. Santo (member of the People's Defense Association of Harlem); Father Lyons
Synopsis
Angie Freeman and Jimmy Sarran investigate the murder of a junkie (drug addict) and find others. Angie believes it is the work of a vampire. She finds her brother is protecting the People's Defense Association of Harlem as a vampire and they want to sacrifice her.
Reprints

First Line of Dialogue or Text
Lord protect me! You -- you're a... ...vampire!!!
Genre
horror-suspense
Characters
Stevens; George Crandall; Mrs. Crandall; Mina (a vampiress)
Synopsis
George is getting old and contemplates on how to live forever. He see an ad in the paper for an attractive vampiress seeking a warm-blooded man. He leaves his wife and heads to the address in the ad and meets Mina. She bites him, but his wife decides to have him cremated (burned).
Reprints

Article on the TV show Dark Shadows with multiple photographs of characters.

The Color of Crimson Gold (Table of Contents: 8)

First Line of Dialogue or Text
That crippled beggar's infirmity is truly my fortune...
Genre
horror-suspense
Characters
unnamed peasant (death); Tevye (a peddler, death); Tovarr (a gypsy, death); Maleva; Lupesch (death)
Synopsis
A peasant buys a treasure map from a crippled beggar. Tevye want twice as much gold to continue to supply victims to a group of vampires. Tevye sells a copy of the map to Tovarr. After being warned of vampires in the treasure's cave, Tovarr cautiously enters the cave and hear Tevye and the vampires talking. Tovarr and his friends kill Tevye and leave a trail of blood for the vampires to follow to a cabin where they trap them in and burn it down. After they retrieve the gold and are about the leave the village, the villagers confront them and burn them at the stake.
Reprints

Article of preview paragraphs of upcoming movies and books.