Hawkgirl is not wearing a mask on the cover. 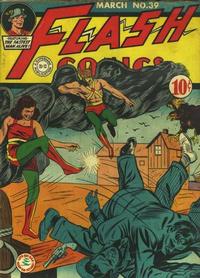 Play of the Year (Table of Contents: 3)

Genre
superhero
Characters
The Flash [Jay Garrick]
Synopsis
A theatre promoter devises a plan to revive a play with its original cast of stars as the drawing card. Although the Flash thinks the man is crazy, crookdom decides it's too good to pass up!

The Biggest Thing in Bi-Monthlies!! (Table of Contents: 4) (Expand) /

First Line of Dialogue or Text
This is a Nazi spy by the name of Count Orf...
Genre
humor; superhero
Characters
Johnny Thunder; Count Orf (villain)

Free! An Autographed Picture of Wonder Woman to All Those Who Help the March of Dimes! (Table of Contents: 8)

Genre
advocacy; superhero
Characters
Wonder Woman [Diana Prince]; Hippolyte; Steve Trevor
Synopsis
Wonder Woman explains infantile paralysis to her mother, and how it can be treated with an iron lung. She agrees to offer an autographed picture of herself to each child who contributes to the March of Dimes.
Keywords
infantile paralysis; invisible plane; iron lung; March of Dimes; mental radio

Writer unlikely to be Jack Schiff, who did DC's PSAs from 1949-1967 but is not known to have worked on any All American titles prior to their merge with DC, so probably written by an AA staffer. Ted Udall was on the AA staff in 1942-3, wrote a lot of the AA fillers, and would have been familiar with Wonder Woman, so he's a likely suspect. Another is (the future) Dorothy Woolfolk, who was also staff around this time, and is said to have written Wonder Woman, prior to her working on EC's Moon Girl in 47. Sheldon Mayer has also been identified as a potential writer of this PSA, but the source of that credit is not known.

First Line of Dialogue or Text
It's always funny when a playboy with too much money gets rebuffed...
Genre
western-frontier
Characters
The Whip [Rod Gaynor]
Keywords
Diablo Cafe

The Timetable of Crime (Table of Contents: 19)

Genre
superhero
Characters
The Hawkman [Carter Hall]
Synopsis
A former railroad man devises a foolproof timetable for crimes to be committed, each guaranteed to outwit the law and the Hawkman.

Another Meeting of the Justice Society! (Table of Contents: 20) (Expand) /