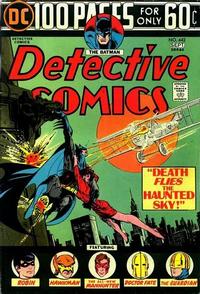 With due homage to Bob Kane, Jerry Robinson, George Roussos, and Neal Adams.

The House Where Time Stood Still (Table of Contents: 3)

Job Number
N-464 ?
First Line of Dialogue or Text
The old house huddles in its weed-grown yard... an enigma from the past...
Genre
superhero
Characters
The Guardian [Jim Harper]; The Newsboy Legion [Tommy Tompkins; Big Words [Anthony Rodriguez]; Gabby [Jonathan Gabrielli]; Scrapper [Patrick MacGuire]]; Hector Presby; Julius Presby; August (villain, Nazi spy); Karl (villain, Nazi spy)
Synopsis
Citizens are very concerned that the Presby brothers haven't been seen in over 25 years, so the boys and the Guardian investigate, only to learn that they locked themselves in their home to avoid contact with World War 1 and now World War 2. However, that plays right into the hands of a couple of Nazi spies who intend to use their home as a secret Nazi radio station to contact submarines.
Reprints

The Huntress of the Highway! (Table of Contents: 5)

Job Number
N-967
First Line of Dialogue or Text
The highway was haunted! How else could one explain the trucks that traveled on it... to nowhere!
Genre
superhero
Characters
Black Canary [Dinah Drake]; Larry Lance (introduction, boyfriend, private detective)
Synopsis
Black Canary must help Larry in his quest to discover why trucks keep disappearing on the Franklin Turnpike.
Reprints
Keywords
Franklin Turnpike; Gotham City

The Robbery That Never Happened! (Table of Contents: 6)

Job Number
L-330
First Line of Dialogue or Text
Thanks to some scheduling changes, we're down to one page for letters this issue.
Characters
Batman
Keywords
telephone

Alan Kupperberg is the credited letterer of this story in Manhunter: The Special Edition (1999), where this story is reprinted. The Simonson lettering credit is per Archie Goodwin on page 97 of Detective Comics #443 (October-November 1974).