All references to Dracula in this issue are to the version of Dracula as he appeared in one episode of "Buffy the Vampire Slayer".
Spike created by Joss Whedon and David Greenwalt.
Special thanks to Debbie Olshan at Fox Worldwide Publishing for her invaluable assistance.
This issue has variants: 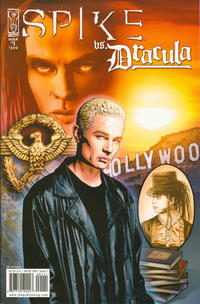 Genre
fantasy-supernatural; horror-suspense; superhero
Characters
Spike; Darla; Drusilla; Dracula; Magda
Synopsis
After Spike, Drusilla and Darla massacre the gypsy clan that cursed Angel with a soul they learn that the clan was under Dracula's protection. Dracula captures Darla and Drusilla and intends to kill them until Spike shows up to save them.

This story takes place shortly after Magda cursed Angel with a soul in the late 1800's. The whole story is based on a thow-away line by the character of Spike on the tv show 'Buffy the Vampire Slayer' where he claimed that Dracula still owed him 11 pounds.

The Not-So-Secret Show (Table of Contents: 2)

Synopsis
Interview with Chris Ryall about the upcoming adaption of Clive Barker's novel 'The Great And Secret Show' with some sketches.