Too Big to Live! (Table of Contents) 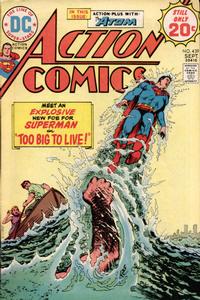 Job Number
S-1773
Genre
superhero
Characters
Superman; Captain Strong; Carnox; Olivia Tallow; S. T. A. R. Labs; Mr. Mitchel
Synopsis
The spaceman Carnox was caught on Earth 1 million years ago and is revived in the present. He has got a disease that can be cured by Captain Strong's sauncha plants.
Reprints