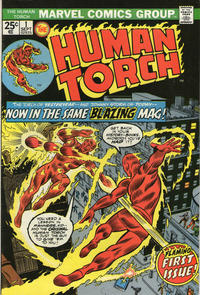 Genre
superhero
Characters
Human Torch [Johnny Storm]; Invisible Girl [Sue Storm] (cameo); Thing [Ben Grimm] (cameo); Mr. Fantastic [Reed Richards] (cameo); Destroyer [Charles Stanton] (Intro)
Synopsis
In Glenville, Johnny lives with his sister Sue. While she's known as a member of the Fantastic Four, he tries to keep a low profile. We get to see the house, much of which is chemically fire-resistent, and equipped with various crime-fighting equipment. But even in the suburbs danger lurks, as someone called The Destroyer is hell-bent on wrecking a local amusement park nearing completion.
Reprints

Part 1 of 2. Contains diagram of Sue and Johnny's house and a very brief recap of the Fantastic Four's origin. Page 3 cut, last panel of page 2 replaced by a Fantastic Four stat by John Buscema and Joe Sinnott. On splash page, "Starring...America's Favorite Superhero:" replaced with "Johnny Storm." Plot, script and art credits added for reprint; original had no credits. splash slightly reformatted with new intro and page numbers removed for this reprint.

Genre
superhero
Characters
Human Torch [Johnny Storm]; Thing [Ben Grimm]; Destroyer [Charles Stanton]
Synopsis
Ben shows up, but Johnny refuses help, saying it's his fight. After another encounter with The Destoyer, Johnny gets a hunch when he realizes the targets so far have been the roller coaster and the parachute jump. Atop the coaster, he looks out to sea and spots a Commie sub! The Destroyer turns out to be Charles Stanton, publisher of the town's newspaper, who'd been smuggling info to the Reds until the building of the amusement park increased the risk that the submarine might be seen.
Reprints

Job Number
3338
Genre
superhero
Characters
Human Torch [Jim Hammond]; Mercer
Synopsis
A hotel is terrorized by a "man-killing beast," sending tenants fleeing. But when The Torch investigates, it seems almost no one has actually seen the monster. The "monster" turns out to be the work of a revenge-crazed madman who'd been fired by the hotel for thievery.
Reprints