Jerry's and Tuffy's colorations are reversed. 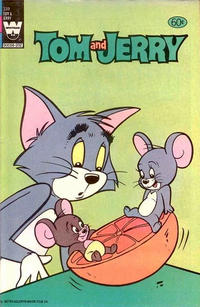 Ongoing series within a series, in which the characters are set in Renaissance France.

Genre
anthropomorphic-funny animals
Characters
Tom; Jerry; Tuffy
Synopsis
Annoyed at Jerry's and Tuffy's constant racing, Tom tries to ditch them for replacement with squirrels in an exercise wheel. The mice repeatedly outwit him, finally wrecking his car. Tom forces Jerry and Tuffy into the wheel to replace the engine.
Keywords
cat; mouse; race

Genre
anthropomorphic-funny animals
Characters
Spike; Tyke; Chickydoodle
Synopsis
When a young rooster repeatedly mistakes the night moon for the rising sun, Spike hypnotizes him into sleep. By then, though, morning has come, and the master won't feed the dogs until the rooster crows.
Reprints
Keywords
dog; hypnosis; rooster