The Legionnaire Nobody Remembered? (Table of Contents)

Lightning Lad and Saturn Girl are in their present-day costumes on the cover, not the costumes they wear in the flashback story it reflects. 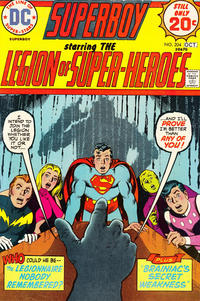 The Legionnaire Nobody Remembered (Table of Contents: 1)

Job Number
B-2092
Genre
superhero
Characters
Legion of Super-Heroes [Mon-El; Lightning Lad; Cosmic Boy; Superboy; Saturn Girl; Phantom Girl; Colossal Boy; Chameleon Boy; Brainiac 5]; Anti-Lad
Synopsis
The Legionnaires ponder a photo in their archives featuring a Legionnaire no one remembers, Anti-Lad. The readers are told how a time traveller from the far-distant future saw Superboy being rejected by the Legion in his initial tryout and went to the Legion's time to make sure they gave the Boy of Steel a second chance.
Reprints

In the sequences related to Superboy's initiation tests, the Legionnaires are wearing their classic Silver Age costumes, not the versions they wore in the actual story.

Job Number
B-2080
Genre
superhero
Characters
Star Boy; Brainiac 5; Supergirl; Saturn Girl
Synopsis
Brainiac 5 misses Supergirl so much his subconscious mind creates an android version of her. When Brainy and his android get into trouble, the real Supergirl saves them and announces she is leaving the Legion.
Reprints