The Thing in the Black Box! (Table of Contents) 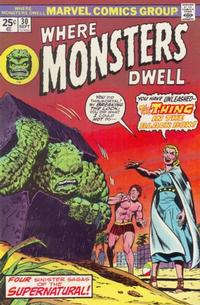 The Thing in the Black Box! (Table of Contents: 1)

Job Number
[V-377]
Genre
fantasy-supernatural
Characters
Dan Harper; Pandora
Synopsis
A shipwrecked man meets the legendary Pandora, who tricks him into releasing the demons from her box. Humanity is helpless against the demons, but the man forces Pandora to recall them by dispelling her illusory beauty.
Reprints
Keywords
Greek mythology; monsters; Pandora's box

Job Number
[E-176]
Genre
horror-suspense
Synopsis
A man commits suicide after spending thirteen years of his life waiting for stolen jewels to cool off only to be told they are fake.
Reprints

The Man Who Wasn't (Table of Contents: 3)

Genre
science fiction
Synopsis
A man invents a youth serum and wishes to give it to the oldest member of an old folks home, but the man doesn't want it. When they administer it to him anyway, he reverts to his true alien form, which is the signal to begin the invasion.
Reprints

Job Number
[F-202]
Genre
science fiction
Synopsis
A writer finds an alien and makes a pet out of him, but when his fellows come for him, the tables are turned.
Reprints