First Issue! From The Editors Of Creepy (Table of Contents) 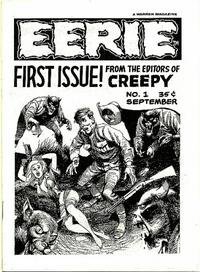 Image of Bluebeard! (Table of Contents: 2)

Genre
horror-suspense
Characters
Monica Cerulean; Brian Cerulean; Bluebeard; Fatima (Death); Uncle Creepy (Host)
Synopsis
Monica’s new life married to Brian is very lonely and soon she begins to suspect that he spends time away from her because he is in reality Bluebeard!
Reprints

The Script and Letters credit comes from the index to Creepy #7.

Genre
horror-suspense
Characters
Uncle Creepy (Host)
Synopsis
A mysterious plane shoots down both Germans and Americans during World War I. One unlucky pilot sent to shoot down the plane manages to see the face of the one piloting this plane, although he wishes he hadn’t.
Reprints

The Script and Letters credit comes from the index to Creepy #8.

The Invitation (Table of Contents: 4)

Uncle Creepy is not in this story but he is in the reprint in Creepy #8. The Script and Letters credit comes from the index to Creepy #8.

Letters credit from the index of Creepy #2, Uncle Creepy has been replaced by a very crude Cousin Eerie. Inside back cover.