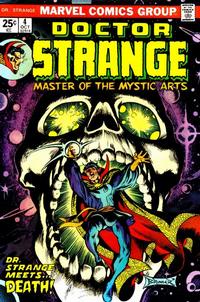 Some credits not in issue from Englehart and Brunner via email. Bob Wiacek inker credit from Back Issue #19. Wiacek noted on Facebook that this was his first work as a Crusty Bunker.

Overstreet states that Neal Adams did some of the inking in this story. Nick Caputo suspects Neal was involved primarily on the Doctor Strange figures.

Wondrously Witty Words from a Woomful of Wombats! (Table of Contents: 3) (Expand) /