Up, Up, and Away! Finale (Table of Contents) 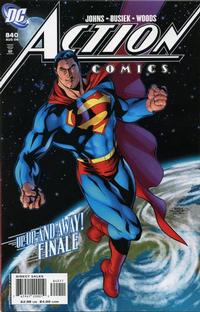 Up, Up, and Away! Finale The Adventures of Superman (Table of Contents: 1)

Genre
superhero
Characters
Superman; Lex Luthor; Lois Lane; Jimmy Olsen; Perry White; Dr. Virus [Dr. Verisofsky] (intro); Kryptococcus the Omni-Germ (intro); Meg Tempest (cameo); Mahjoub
Synopsis
Superman and Luthor fall into the bay. They swim to a small island, where Superman discovers his powers are gone again. Luthor insists on fighting, but after a few minutes, Superman knocks him unconscious. But then Superman blacks out himself. When he awakens, the Coast Guard has just taken Luthor away, and they want to take Superman to the hospital, but, as his powers are returning, he refuses and flies off, returning home to Lois. Dru-Zod's ship is recovered; Luthor is claiming the ship controlled him, and Clark gets an old typewriter as a package from his mother. Perry complains about Clark's disappearance, but Clark turns in several supporting stories he did in the meantime. Perry still tries to bawl him out, but Lois stops him. They talk with Jimmy, who is also recovering. Superman helps shore up some of the wreckage from the fight, and meets up with Jimmy. Jimmy gives him the sunstone crystal that he found, and Superman gives Jimmy a new signal watch. They are interrupted by Dr. Virus and Kryptococcus, but Superman dispatches them quickly. The Dr. reveals he was forced into this attack by Intergang. Superman signs autographs, and then hears that Luthor has escaped from prison. Mahjoub gives Superman a gift as a thank you. Superman flies to the north polar ice cap, analyzes the sunstone crystal, and realizes what it can do. He activates it, throws it on the ice, and it grows a new Fortress of Solitude. Then he enjoys the pretzel that Mahjoub gave him.
Reprints
Keywords
crystal Fortress of Solitude; signal watch; sunstone crystal