In This Future, Bad Guys Wear Green (Table of Contents) 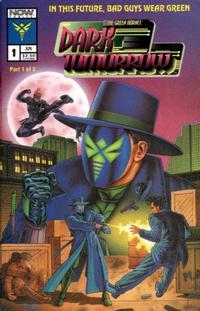 A Blacker Shade of Green (Table of Contents: 1)

Genre
crime; science fiction; superhero
Characters
Future Green Hornet II [Clayton Reid]; Future Kato [Luke Kato]; Future Green Hornet I [Gordon Reid] (dead; a virtual reality program simulation, which also includes Clay's mother, Aya Tonaga, and paternal grandparents, both unnamed); Green Hornet IV; Green Hornet II; Green Hornet I (all three via VR headshots)
Synopsis
In "the late 21st century," the Green Hornet of that time interrupts people dealing illegally in contact lenses that are virtual reality projectors, demanding his cut, but unlike previous Hornets, he means it. This one has really gone bad, and he finds his own rackets under attack from the Steel Syndicate, an international criminal conglomerate. A virtual reality visit from his very disappointed predecessor, his own father, makes this Hornet, Clayton Reid, begin to have doubts about what he's doing, when a new Kato invades his headquarters, announcing that he's here "to kill you!"

#1: First names "Gordon" and "Luke," which are homages to Green Hornet movie serial stars Gordon "Reid/Hornet" Jones and Keye "Kato" Luke, are not given anywhere in this miniseries, but are found on the Reid & Kato family trees in Green Hornet (NOW Comics, 1991 series) (aka Vol. 2) #26 (October 1993) Sequence 2, as is Clay's mother's name ("Clayton," a similar tribute to TV Lone Ranger Clayton Moore, and its diminutive "Clay" ARE frequently used here). #2: The virtual reality appearance of the elder Hornet is a mystery: Among the included flashbacks is a prepubescent Clay grieving at his father's funeral. Subsequently, Gordon describes the way his son's unprecedented success in dominating The City's criminal elements went to his head and corrupted him. When combined, the two eliminate the possibility of Gordon himself having recorded such a message for his son in his own lifetime, so just where did this VR program come from, and what did Clay EXPECT to see when he put in the lenses and accessed the "reminisce program," completely voluntarily? #3: Judging from his own appearance as well as the design of the Hornet mask he is shown handing to Gordon, Clay's grandfather seems to be Paul Reid [Green Hornet IV] and, similarly, the grandmother is likely Mishi Kato [Kato III] [The Crimson Wasp]. In issue #2, Kato does in fact address Clay as "Cuz," and when the other asks why, says he does this because, "...as much as it nauseates me to admit it, we're cousins...." (Clay flatly calls him "a liar," surprisingly so if that clearly Asian grandmother is indeed a Kato, but he is eventually convinced; since Luke has blond hair and Caucasian features, it may be that HE has REID blood from a union that Clay could more understandably be unaware of). #4: The first caption on page 13, which places a background event in the year "2138" (i.e., the 22nd century) must be a letterer's error, as there are too many other references to the late twenty-first century, including one found in the opening caption of the second issue which expressly gives it as this story's time frame.

Synopsis
A request for readers to write in with their opinions about this comic, along with a textual preview of the following issue, all backed with the futuristically stylized Hornet emblem from the holographically projected full-face "mask" of Future Green Hornet II.

The Big Ten with Clint McElroy (Table of Contents: 4)

This feature appeared on the last interior page in most NOW Comics releases for this month.