The Monster of Frankenstein! (Table of Contents) 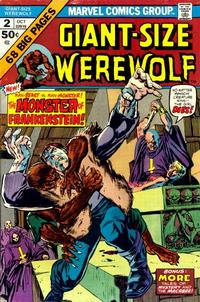 The Frankenstein Monster Meets Werewolf by Night (Table of Contents: 1)

First Line of Dialogue or Text
It is a sordid alley, stuffed with gloom and squalid filth.
Genre
horror-suspense; superhero
Characters
Werewolf by Night [Jack Russell]; Frankenstein Monster; Danton Vayla (first appearance; death); Brotherhood of Baal (first appearance; destruction); Lissa Russell; Buck Cowan; Jimmy; Gimpy; Acolyte Croft
Synopsis
The Frankenstein Monster travels to California to see if Danton Vayla can help him. At the same time, the Brotherhood of Baal, run by Vayla, kidnaps Lissa Russell and plans to sacrifice her in a magical ritual. Jack Russell, while searching for his sister changes into the Werewolf by Night and attacks the Frankenstein Monster.
Reprints
Keywords
monsters

This story is broken into three chapters. Chapter one is titled Prisoners of Flesh!, Chapter two is title To Host the Beast, and chapter three is titled The Flesh of Satan's Hate!

Mind Over Matter (Table of Contents: 3)

Genre
horror-suspense
Characters
Gordon Langley; Allen
Synopsis
A man has been trained by Indian mystics to be able to make objects disappear, merely by doubting their existence. When he tries to tell his friend of his new powers, the friend is skeptical until he sees a demonstration. The friend goes into a panic, and asks the man what would happen if he doubted all of existence?
Reprints

The Ape Man (Table of Contents: 4)

Job Number
V-173
Genre
horror-suspense
Characters
"Salty" Gruner; Ape Man
Synopsis
A prisoner plans to escape, and hopes that the legend of an ape man in the jungle around his prison will deter pursuit. Instead, he finds that the ape man is real and pursues him. The Ape Man transfers the gypsy curse which originally transformed him into an ape onto the prisoner.
Reprints

The Barefoot Man (Table of Contents: 5)

Characters
Pablo
Synopsis
Pablo, a poor Mexican, longs for a pair of boots to ease the pains in his bare feet. He finally resorts to mugging a man, and stealing his boots. Soon, Federal agents arrest him, as they have been tracking the distinctive boot-prints of a notorious killer, and Pablo will hang for the crimes he did not commit.
Reprints

The Werewolf of Wilmach! (Table of Contents: 6)

Genre
horror-suspense
Characters
Fang; Kessel; Karl; Heineman
Synopsis
Several deaths have a village in a panic over the werewolf prowling the moon-lit streets. Two ne'er-do-wells plan a robbery while the town is gripped in fear, but the two should know that there is something to fear that is worse than being caught.
Reprints