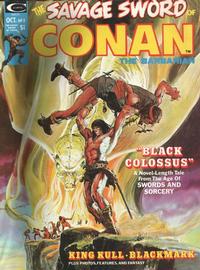 Excerpt from The Nemedian Chronicles, photograph and introduction.

First Line of Dialogue or Text
Only the Age-old silence broods over the mysterious ruins of Kuthchemes...
Genre
sword and sorcery
Characters
Shevatas
Synopsis
Shevatas the Thief breaks into a long-deserted temple and finds a large amount of treasure.
Reprints

[Black Colossus] Part II Hordes of the Veiled One (Table of Contents: 5)

First Line of Dialogue or Text
Minstrels sing the beauty of the princess Yasmela...
Genre
sword and sorcery
Characters
Conan; Princess Yasmela; Natohk the Veiled One; Vateeza; General Malthom; Count Thespides; Taurus
Synopsis
Princess Yasmela places Conan in charge of her army and they ride south to meet the army of Natohk.
Reprints

First Line of Dialogue or Text
Since Conan's birth on a Cimmerin battlefield, death has been ever a constant companion.
Genre
sword and sorcery
Characters
Conan; Princess Yasmela; Natohk the Veiled One [Thugra Khotan]; Fahim; Shevatas the Thief; General Malthom; Count Thespides; Katuman
Synopsis
Conan and his army defeat Natohk, but when Natohk takes the princess, Conan is forced to follow Natohk's demonic chariot and destroy the sorcerer.
Reprints

Chapter 1 Kingdoms of the Dawn (Table of Contents: 7)

First Line of Dialogue or Text
Any history of sword-and-sorcery fiction is inevitably tempted to begin with Robert E. Howard...
Genre
sword and sorcery
Reprints

Adapted from Blackmark by Gil Kane (Bantam Books paperback, 1971) and scripted by Archie Goodwin from outlines supplied by Gil Kane. This reprint does not credit Goodwin for his contribution.

First Line of Dialogue or Text
Of that epoch known by the Nemedian chroniclers as the Pre-Cataclysmic age...

Introduction to The Beast from the Abyss.

The Beast from the Abyss (Table of Contents: 10)