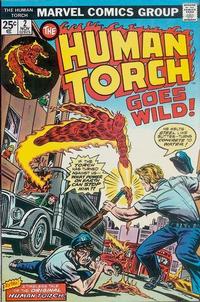 Genre
superhero
Characters
Human Torch [Johnny Storm]; Wizard (Origin, Intro); Invisible Girl [Sue Storm]; Destroyer (cameo)
Synopsis
watching a newsreel about the Torch, The Wizard thinks it would be a great challenge to match his skills against him. The Wizard considers himself the world's greatest brain. He sees beating Johnny as somehow "the ultimate achievement," and tricks Johnny into rescuing him when a digging machine he's trying out appears to go wrong. Showing off his home in gratitude, he suddenly douses Johnny with flame-retarding chemicals.
Reprints

Part 1 of 2. First appearance (and origin) of The Wizard. Credits added, splash page reformatted and page numbers removed for this reprint.

Genre
superhero
Characters
Human Torch [Johnny Storm]; Wizard; Invisible Girl [Sue Storm]
Synopsis
The Wizard makes Johnny a prisoner and with a special suit impersonates him, commits a bank robbery, performs a mass jail-break, extorts money from commuters on a bridge, all to make The Torch appear a criminal, and "prove" he is superior. Later, The Wizard shows Johnny photos that prove he committed the crimes but since Johnny won't kill an unarmed man he'll have no choice but to watch as The Wizard burns the evidence but the photos fly from The Wizard's hands. Johnny calls the police, turning over the pics and the Wizard. We discover he beat the Wizard with help from Sue.
Reprints

Part 2 of 2. With so much going for him, the only explanation for The Wizard turning to crime is what Johnny suggested-- he's nuts! Next appearance in Strange Tales #105 (February 1963).

Genre
superhero
Characters
Original Human Torch [Jim Hammond]; Toro; Hyena (Intro); Lorraine Miller (owner, Miller Trucking); Mr. Lennox (manager)
Synopsis
A criminal called The Hyena is causing truck crashes, the latest of which resulted in the driver being killed. Although Lennox, the manager, advises Lorraine Miller, the company owner, to sell out, she's determined not to, and accepts help from The Torch and Toro. Following another crash, they capture 2 of the hijackers, and Lorraine figures someone inside the company tipped them to the truck's secret route. The Torch and Toro barely manage to save her life and capture the villains. After, The Torch says of Lorraine, "She's got everything it takes-- plus!"
Reprints

The Hyena's next appearance is in The Invaders Annual #1 (1977). The method of using a mirror to make vehicles crash was used in the Lon Chaney film The Monster (1925), and later reused in the 007 film Goldfinger (1964).