And Now..the Wolverine! (Table of Contents)

Romita alterations on the Hulk per Nick Caputo, July 2012. The unaltered cover was published in The Mighty World of Marvel # 198. 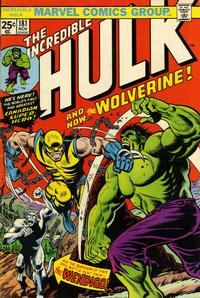 And Now...The Wolverine! (Table of Contents: 2)

First Line of Dialogue or Text
Instant recap dept.: ol' greenskin has been lured to Quebec, Canada as part of a fantastic plan to cure the wild-eyed woods-beast called the Wendigo--
Genre
superhero
Characters
Hulk [Bruce Banner]; Wolverine (see note); Marie Cartier; Georges Baptiste [becomes Wendigo]; Wendigo [becomes Paul Cartier] (villain)
Synopsis
Canadian super-agent Wolverine teams up with the Hulk to battle Wendigo. Once the monster is felled, however, Wolverine turns on the Hulk and the two battle. Marie goes ahead with her plans of trying to transfer the power of the Wendigo into the Hulk but when the guilt becomes too much for best friend Georges who feels responsible for Paul's monstrous condition, he works the change on himself. Paul Cartier is returned to human form and Georges becomes the Wendigo.
Reprints

This is Wolverine's first full story appearance after the final teaser panel in last issue.

Next Wendigo in Monsters Unleashed #9.

The Defenders / promo (ad from the publisher) / 0.33 page (report information)