Grasp of the Killer Cult (Table of Contents)

Cover includes small reproductions of the covers to Teen Titans (DC, 1966 series) #16 by Nick Cardy and The Brave and the Bold (DC, 1955 series) #78 by Bob Brown, and headshots of Deadman by George Tuska and the Silent Knight by Irv Novick from unidentified sources. 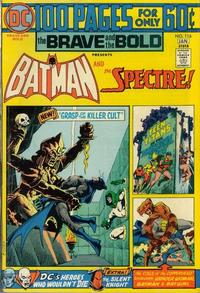 The Brave and the Bold Presents (Table of Contents: 1)

Grasp of the Killer Cult (Table of Contents: 2)

Job Number
B-2087
Genre
superhero
Characters
Batman; Spectre [Jim Corrigan]; James Gordon; Lola Lalanna; John T. Weaver; James Wilson
Synopsis
Bizarre murders are committed by seemingly upstanding citizens who are soon determined to be imposters. They turn out to be members of a World War II military construction crew possessed by the spirits of followers of the Far Eastern goddess Kali. It takes the power of the Spectre to prevent her resurrection.
Reprints

The Dimensional Caper! (Table of Contents: 3)

Lower half of final page of Sequence 3. Answers in Sequence 6.

Knight for a Day! (Table of Contents: 5)

Job Number
B-2232
Genre
historical; adventure
Characters
Silent Knight
Synopsis
True heir to the throne Brian is assigned to deliver the Sun Ruby to a neighboring kingdom, in the hope that he will be killed travelling through the Forest Perilous, but as the Silent Knight he surmounts all obstacles.
Reprints
Keywords
swashbuckler

Bottom third of last page of Sequence 5. The source of the Batman and Sgt. Rock figures are currently unidentified.

In the Coils of Copperhead! (Table of Contents: 9)

This story is divided into three chapters, the last page of each being two-thirds story/art and one-third DC house ad.

The Many Lives of the Spectre (Table of Contents: 10)

Batman fills in the readers on the background of his co-star this issue, the Spectre.

The Batman vignette is from an unidentified source.