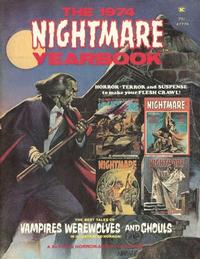 The God of the Dead (Table of Contents: 3)

Genre
horror-suspense
Characters
Dracula; Evangeline; Magdeline
Synopsis
Dracula creates an army of the children of a village and then sends them to kill their parents.
Reprints

The Saga of the Human Gargoyles (Table of Contents: 4) (Expand) /

Dracula Is Alive (?) and Evil in This 1974 Nightmare Yearbook (Table of Contents: 5)

A Rottin' Deal (Table of Contents: 7)

Genre
horror-suspense
Characters
Alex Nimbo; Florence Nimbo; Dileeth
Synopsis
Alex Nimbo murders his wife to get out of his hellish marriage and to get to the land of his dreams.
Reprints

The writer's name was misspelled as Jerry Seigel in the credits.

The Archaic Back Issues Vault of Horror-Mood Masterworks (Table of Contents: 9) (Expand) /

Power of the Pen (Table of Contents: 12)

Hag of the Blood Basket! (Table of Contents: 13)

In the original printing (Nightmare #4) Tom Sutton used the pseudonym Sean Todd. In this reprint there is no mentioning of Sean Todd, just Tom Sutton.