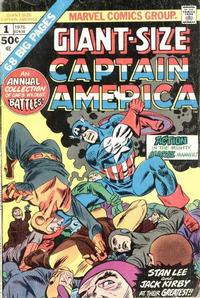 Genre
superhero
Characters
Captain America [Steve Rogers]; Bucky [James Buchanan Barnes] (in photograph); Edwin Jarvis; "Boss"; Bull; unnamed thugs
Synopsis
While Cap lounges around Avengers Mansion, thinking about Bucky and his place in the world, a gang of costumed thugs break in intent on stealing any secrets or weapons Stark may have lying about the place, to sell for profit. They figure Cap's "just an acrobat." They figured wrong! He mops up the place with them single-handed, then comments how lucky they were his partners weren't around..."They're really tough!"
Reprints

A Hearty Helping of High-Falutin', Habit-Formin' Happenings From Your Humble House of Ideas! (Table of Contents: 2)

Stan Lee's Soapbox; Items; A Bullpen Extra. Stan Lee announces that the origin stories in Son of Origins will feature the X-Men, Iron Man, the Avengers, Daredevil, SHIELD, the Watcher and the Silver Surfer and says that there will probably be a book like this put out annually. The book will cost $5.95 in paperback and $9.95 for the cloth-bound hardback version. Items about the second series of Marvel Value Stamps that will make up ten jigsaw puzzles featuring the finest artwork that money and discarded back-date issues of Not Brand Ecch can buy, the 10th issue of FOOM features an all X-Men issue with a cover by Dave Cockrum, if you rush to your newsstand you may still be able to find a copy of the Marvelous Wizard of OZ featuring scripting by Roy Thomas, penciling by John Buscema and inking by the talented Tribe, the latest issue of Tomb of Dracula by Marv Wolfman, Gene Colan and Tom Palmer doesn't have Dracula appear anywhere in the issue, a scorecard is given for people to pencil in the current writers/artists (and some of the characters/comics listed may not have been announced yet) and five minutes of the Fantastic Four will be featured on radio during the weekdays so if it isn't listed in your city contact your local station manager or program director and have him contact the producer Robert Michelson immediately so you won't miss out. Appears between pages 16 and 17 of the story sequence.

The Incredible Hulk and the Twins of Evil! (Table of Contents: 3)

Two young boys revive the Hulk with Hostess Fruit Pies after he has been beaten by the Abomination and the Wendigo.

The Army of Assassins Strikes! (Table of Contents: 4)

The Strength of the Sumo! (Table of Contents: 5)

Captain America pin-up with six stars around him.

The Origin of Captain America! (Table of Contents: 9)

Hulk It For Halloween! (Table of Contents: 10)

Advertisement for halloween costumes (Spider-Man, Hulk or Captain America) that come in three different sizes and cost $2.79 plus $.75 shipping each.