A Rage Of Retribution! (Table of Contents) 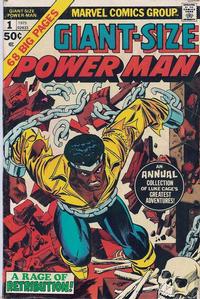 Retribution! Part I (Table of Contents: 1)

Previous "Hero for Hire" writer Steve Englehart is credited as "Camp Counselor." Tony Isabella blogged on July, 5, 2013:
"'Hero for Hire' #15 was running incredibly late when I was asked to script the issue’s truncated 11-page Luke Cage story. ... Roy Thomas asked me to write Hero for Hire #15 and #16. He knew I was a fan of both Luke Cage and Englehart’s writing and I knew I would have killer deadlines on both issues. When I took the job, I was given the penciled pages for issue #15. I received no plot or script, but I’m pretty sure there were some brief border notes on the pages. I’m also pretty sure I was told Billy plotted this story. I can’t recall why I (or anyone else) credited him as the
co-scripter. He should’ve been credited as plotter or co-plotter. In either case, I received nothing by Englehart before I scripted these pages. I didn’t even talk to him about the story. He might not have even been in New York at the time." http://tonyisabella.blogspot.com/2013/07/hero-for-hire-15-16.html

Writer credits from Steve Englehart's website, 8/30/2006. There is a dispute on correct writer credits. The credit line reads "Tony Isabella writer, Billy Graham penciller", etc. In 2006, Steve Englehart has said that he co-plotted this story with Billy Graham. On July 5, 2013, Tony Isabella stated that he wrote this story "full script style" without plotting assistance from either Englehart or Graham.