The on-sale date is the publication date reported in the U. S. Copyright Office filing. Month of publication is listed as [May], in accordance with the reprint of the cover on the inside back cover of Special Edition X-Men #1, which carries a May date. At this time, there was usually a three-month difference between on-sale and cover/indicia dates. 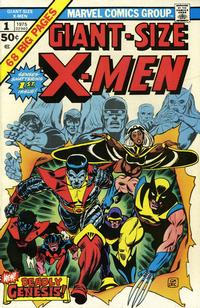 Sources for particularization of story/script credits are The Marvel Comics Index (Olshevsky 1981) and The Official Marvel Index to the X-Men (Olshevsky 1987).

Peter Iro is credited with background inks in many sources, but none of his work was in the finished product, per Dave Cockrum: "First--your listing of X-Men Special Edition #1 lists Peter Iro as one of the creative team on Giant-Size X-Men #1. It's about time somebody put the lie to this one: Pete Iro did indeed try his hand at inking my backgrounds on FIVE PAGES ONLY. [Emphasis his] Even if a background assistant completes a full job, he gets no credit whatsoever for having worked on the job. But aside from that, the five pages he inked were so crudely and amateurishly butchered that I was forced to white out all his work and re-ink those pages myself. In view of this fact, it's obvious why I resent Iro being listed as having worked on the book: I inked that book entirely, and no one else." (The Comic Reader #208)

The Female of the Species! (Table of Contents: 4)

Marvel Girl featurette
Edited reprint: a caption on page 1 is rewritten, and page 2 is cut.