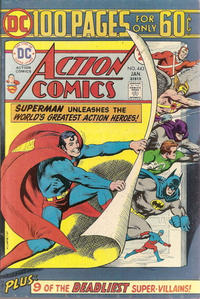 The Ghost of the Deep! (Table of Contents: 5)

Job Number
N-1146
Genre
adventure
Characters
The Sea Devils [Dane Dorrance; Judy; Biff; Nicky]; Circe Smith; Circe (from mythology)
Synopsis
After watching a singer named Circe Smith at a nightclub, the Sea Devils appear to meet the mythological Circe during their next dive. She puts the male members into a contest and Dane abandons his oxygen tank, and when Judy tries to save him by sacrificing herself it jolts the boys out of their spell to save her.
Reprints

This story could be explained as a nitrogen narcosis-induced dream of Judy's instead of a real adventure, as the male members have no memory of the adventure at the end of the story.

Job Number
N-1213
Genre
humor
Characters
The Quiet Man; boy
Synopsis
A boy is fishing in what appears to be shallow water, so The Quiet Man wades in. He is immediately submerged in deep water because the boy was standing on stilts.
Reprints

At bottom of final page of Sea Devils story.

A word puzzle. Answers on page 71, at bottom of final page of Adam Strange story.

See the Mystery of the Strange Change (Table of Contents: 15) (Expand) /

Job Number
N-1214
Genre
non-fiction
Synopsis
Definition of a mesa and a butte.
At bottom of final page of Matt Savage story.
Reprints

The Super-Brain of Adam Strange! (Table of Contents: 17)

Job Number
N-1143
Genre
science fiction; superhero
Characters
Adam Strange; Alanna; Sardath
Synopsis
Sardath attempts to control Adam's Zeta-Beam visits to Rann but a side-effect gives Adam a super-evolved brain which also creates a brain-wave menace for the planet. When Alanna shuts down Sardath's machine all returns to normal but some of the brain-wave energy becomes frozen into a rock which Adam takes back to Earth.
Reprints

References Strange Adventures 235 and Action Comics 437. The brain-wave energy rock next appears in the next story in this issue: "Amazing Thefts of The I.Q. Gang!"

Now You Can Get the Copies You've Missed (Table of Contents: 19) (Expand) /

What Does This Campion Have in Common...with You? (Table of Contents: 21) (Expand) /

The brain-wave rock was brought to Earth in the previous story in this issue: "The Super-Brain of Adam Strange!"

At bottom of final page of "Amazing Thefts of the I.Q. Gang!"

The Continuing Adventures of Evel Knievel (Table of Contents: 31) (Expand) /