The on-sale date is from the publication date recorded in the Catalog of Copyright Entries, Part 2, Periodicals, 1943, New Series, Vol. 38, No. 2.

First Line of Dialogue or Text
You have killed my body Shield, but you cannot kill my spirit!
Characters
The Shield [Joe Higgins]; Dusty; The Hun
Reprints

Art notes as for the Shield story.

Splash page from the Shield story. 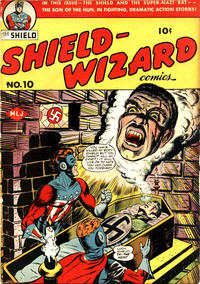 The Curse of the Hun (Table of Contents: 1)

This splash page is printed in Jackpot Comics (Archie, 1941 series) #9, page 34 as an advertisement; it is signed "Sahle."

In the Clear (Table of Contents: 2)

Originally credited to Irv Novick. The art has much in common with the Shield story, like close up faces with very bushy eyebrows, and ears and figures like a signed Harrison story in Hangman #8. Uncertain, but not Novick.

Dusty's last name "Simmons" removed because it never appears in a comic. Lou Mougin reports that he invented the name in a fan fiction story called "War With the Wizard" and gave Dusty that name just to give him a last name.

First Line of Dialogue or Text
Oh golly! Oh golly!
Genre
superhero
Characters
The Wizard [Blane Whitney]; Roy [Roy Carter]; Jane (Blaine's fiancee); Swami Rivers (occultist); a telepathist (villain); Nazi agents (villains)
Synopsis
A fortune teller and occultist, being used by the Nazis for their own purposes, tells the Wizard's fiancee that he knows Blane's secret, so Jane goes to Blane. Deciding to investigate, Blane and Roy discover that the swami's powers are not as great as the Wizard's, but there is a secret telepath nearby whose abilities are very real and dangerous. The Wizard exposes the spy and he and Roy make short work of them. Blane confronts Jane about the secret, and she tells him that the Swami told her that Blane's middle name was "Dinglebottom."

The art doesn't look much like Reinmann, with his panels crowded with people and action.

Reinman pencils and Burlockoff inks suggested by the Who's Who.

First Line of Dialogue or Text
High on a lonely, windswept hill, gently swinging to and fro, hangs a limp figure of what was once a respectable member of the human race!
Genre
superhero
Characters
The Wizard [Blane Whitney]; Roy
Synopsis
A man lynched by a mob is struck by lighning and brought back to life.

First Line of Dialogue or Text
The story about the talking dog
Genre
superhero
Characters
Roy [Roy Carter]; Rover (dog); Harry Shorten
Synopsis
A talking dog is looking for his master: Harry Shorten (the name of the story writer).