To Die at the Hand of Xemu! (Table of Contents) 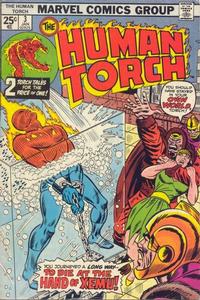 Prisoner of the 5th Dimension! (Table of Contents: 1)

Part 2: Trapped in Another World! (Table of Contents: 2)

Job Number
V-823
Genre
superhero
Characters
Human Torch [Johnny Storm]; Zemu (despot) (Intro); Valeria (Intro); Phineas (Intro); Theos (Intro)
Synopsis
Johnny is transported to another dimension, where, in a futuristic city, he's taken before Zemu, a despot who plans to conquer Earth, and had been trying to drive away the real estate developers from the dimensional passageway. Imprisoned in a water tank, Johnny is freed by Valeria, whose father Phineas wishes to overthrow the tyrant. Zemu's troops attack, threatening to kill the others if Johnny doesn't surrender. But he frees his new friends...
Reprints

Job Number
V-823
Genre
superhero
Characters
Zemu; Human Torch [Johnny Storm]; Valeria; Phineas; Theos; Mr. Harris (teacher)
Synopsis
Johnny uses his flames to create a tornado to take out the asbestos-covered armored tanks, then writes a message in the sky to inspire an uprising! Zemu is quickly overthrown, the people can now live free, and Valeria wishes Johnny could stay. Back in school, Johnny daydreams about her, thinking "I'll never be able to get her out of my mind..."
Reprints

Job Number
SL-1571
Genre
superhero
Characters
Original Human Torch [Jim Hammond]; Toro; Chloe; The Reptile [Webster]; Gus; Colonel Jackson
Synopsis
The Torch & Toro reminisce about a case some time ago... On a rich estate in the Louisiana Bayou, Webster warns away Gus for "molesting" his fiancee Chloe. But on their wedding day, a creature called The Reptile begins a reign of terror and murder, warning all to abandon the estate. Answering Chloe's telegram, The Torch and Toro investigate, and find that not is all as obvious as it seems. At one point, trapped in quicksand, Toro asks "What are we gonna do?" and The Torch replies "It's a cinch we can't write to our congressman!"
Reprints

The Reptile bears a visual resemblance to the Spider-Man villain The Lizard from AMAZING SPIDER-MAN #6 (November 1963). The scene of The Torch and Toro trapped in quicksand is strikingly similar to that of Spidey and Billy Connors trapped in quicksand by Aussie hunter Oli Clivendon in the 1967 SPIDER-MAN cartoon "Fountain Of Terror." "The Original" added on reprint splash page to distinguish the story from the Johnny Storm lead feature. Job number added from the Atlas Tales website.