Comic title appears (on cover only) as Weird Adventure Comics. 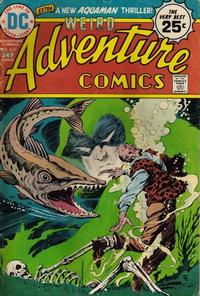 The Human Bombs and... the Spectre (Table of Contents: 1)

A Quiet Day in Atlantis (Table of Contents: 2)

Paul Levitz, in an interview with Rik Offenberger published at ComicsBulletin on August 20, 2003, talks about this story; his first solo super-hero writer assignment: "My first stories were actually in Weird Mystery and Ghost Castle; I only "graduated" to Aquaman in Adventure thanks to Bill Finger. Bill had come in on a Friday to deliver, and was supposed to have two scripts, but only had one done. The check he wanted to pick up was for both, and although Joe [Orlando] wasn't in, I wasn't going to hold back a paycheck for Batman's co-creator... even though Bill was legendary for delivering late and having excuses. But Bill never delivered that story because he died, and by the rules of the time, I was responsible for making up the pages. I asked Joe to let me do something more fun than a mystery story since I had to do it free, and he let me have the Aquaman assignment, and I got to work with Mike Grell. What fun!"

A Never Before Published Classic!!! (Table of Contents: 3) (Expand) /