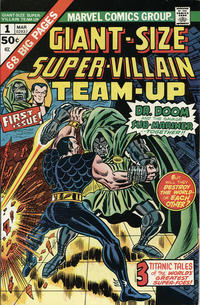 Sub-Mariner between SUB-MARINER #69 / 70; Dr. Doom between FANTASTIC FOUR #144 / 155; Framing sequence for the story that reprints Sub-Mariner 20 and Marvel Super-Heroes 20. The pages of this sequence occur before, between, and after the reprints.

Part 2: In the Darkness Dwells Doom! [Encounter at Land's End!] (Table of Contents: 2)

According to Roy Thomas, Larry Lieber plotted,(likely) dialogued and pencilled approximately the first half of the story when he had to bow out. Roy plotted and wrote the second half, with Frank Giacoia penciling. It appears that Lieber wrote and drew pages 1-11; with Thomas scripting and Giacoia penciling pages 12-24. Info per Nick Caputo, March 2013. Dr. Doom's appearance takes place between STRANGE TALES #167/FANTASTIC FOUR #84. Origin of Dr. Doom retold, this story is also reprinted in Essential Super-Villain Team-Up (Marvel, 2004 series) #1 (2004) [black & white reprint, two page splash edited out].

The Road to Land's End (Table of Contents: 4)