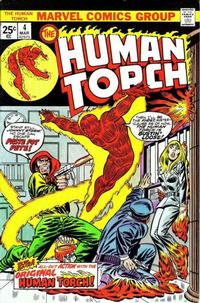 First appearance of Paste-Pot Pete. Next appearance in STRANGE TALES #110 (July 1963). Pete became The Trapster in FANTASTIC FOUR #38 (May 1965). 1st time a villain in this series got away at the end. A genuine animosity seems to have developed very quickly, perhaps as a result of such a "ridiculous" looking baddie almost killing Johnny during their fight. Don Simpson paid tribute to Pete (and Spider-Man) with his character "The Slick" in BIZARRE HEROES. Splash slightly reformatted & page numbers removed for this reprint.

The World's End (Table of Contents: 2)