On sale date from the publication date reported to the U.S. Copyright Office found in the Catalog of Copyright Entries, Part 2, Periodicals, 1943, New Series, Volume 38, Number 2. Class B periodical. Copyright registration number B 578477. 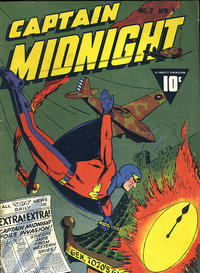 Table of contents with illustrations and a listing of the Editorial Advisory Board. Indicia at bottom of the page.

Editorial Advisory Board listed as: Eleanor B. Roosevelt (listed as past President of the Girl Scouts Council of Greater New York [and at the time, First Lady of the United States, but not noted]); Rear Admiral Richard E. Byrd (listed as "noted explorer, aviator, and author"); Allan Roy Dafoe, M.D. (listed as "the famous quintuplet doctor"); and Reverend John W. Tynan, S.J. (Father Tynan is listed as a member Fordham University faculty).

A Special Treat Throughout the Whole Year! (Table of Contents: 4) (Expand) /

The Strange Secret of the Invisible Plane! (Table of Contents: 7)

Title in the table of contents is "The Plane No Man Could See!"

The Spy of the Spanish Main! (Table of Contents: 9)

Genre
humor
Characters
Little Sneezer; Adolf Hitler; Herr Stoopidpuss; Gremlins
Synopsis
Little Sneezer is ferrying a plane across the Atlantic, when it is attacked by a battalion of gremlins. Sneezer is helped by a "good" gremlin and fights off the other gremlins with one of his sneezes.
Keywords
gremlins

Don Winslow of the Navy / promo (ad from the publisher) / 0.33 page (report information)