U. S. A. COMICS is published monthly at Meriden, Conn., by U.S.A. Comic Magazine Corp. Entered as second class matter May 2, 1941 at the post office at Meriden, Conn., under the Act of March 3, 1879. Contents copyright 1942 by U.S.A. Comic Magazine Corp. 330 W. 42nd St., New York, N. Y., Martin Goodman, Pres. Vol. 1, No. 8, May, 1943 issue. Yearly subscription $1.00 in the U.S.A. No similarity between any of the names, characters, persons and/or institutions appearing in this magazine with those of any living or dead person or institution is intended, and that any such similarity which may exist is purely coincidental. Printed in the U.S.A.

The on-sale date is from the publication date recorded in the Catalog of Copyright Entries, Part 2, Periodicals, 1943, New Series, Vol. 38, No. 2. 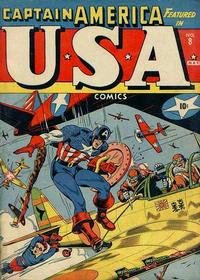 The Invasion of the Killer Beasts! (Table of Contents: 1)

Art credits from the Masterworks edition.

Death Strikes Back! (Table of Contents: 2)

First Line of Dialogue or Text
What's got Jeep so busy?
Genre
humor; military
Characters
Private Jeep Jones; Hotso (villain); Notsohotso (villain)
Synopsis
Jeep introduces his newest invention: the Jeeplane, a weapon designed to be a morale builder among the troops. But two Japanese spies discover the weapon and steal it, with unforeseen results!
Reprints

Two Hundred to One (Table of Contents: 7)

The Masterworks edition lists Bob Oksner as penciler and inker as unknown. Previous indexer credited Allen Bellman on pencils and Oskner or Bellmen on inks.

Shot in the Back (Table of Contents: 8)

[A Story of Brothers] (Table of Contents: 9)

Genre
superhero
Characters
The Whizzer [Jack Robinson]; Arthur Rone (Policeman); Sally Rone (Arthur's wife, mentioned only); Slow Motion (Robinson's valet); Frank Rone (villain); Japanese soldier (villain, cameo); group of Nazi soldiers (villains, cameo)
Synopsis
An incorrigible thief enters Jack's room and steals a diary from his safe: a diary which contains the secret of the Whizzer's speed! And the thief uses it to get revenge on his brother, who is a Policeman.
Reprints

Diamonds for Victory! (Table of Contents: 10)

Genre
superhero
Characters
The Secret Stamp [Roddy Colt]; Mr. Baum; Miss Conroy (A.W.V.S. Captain of the Day); Hans (villain, Nazi agent); Herr Chief (villain, Nazi agent)
Synopsis
Roddy and his pals at A.W.V.S. are out collecting scrap material for the war drive when they come across an old safe that is full of black diamonds.
Reprints

The Masterworks edition lists Bob Oksner as penciler and the inker as unknown. According to the Who's Who, Oksner did both pencil and ink for this strip in 1943, so ? removed by Craig Delich 2013-2-11.

Script credits suggested by the Who's Who.

First Line of Dialogue or Text
With consummate cunning...
Genre
war
Characters
Sergeant Jeff Dix; Sergeant Maloney (death); Ferdinand Jones (villain)
Synopsis
Dix is given the chore of drillin a squad of men who are less than the soldiers they are supposed to be, unaware that one of them is a Fifth Columnist, who has been sent undercover to undermine morale.
Reprints