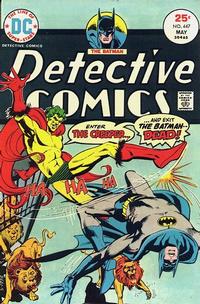 Enter: The Creeper (Table of Contents: 2)

Job Number
S-1936
Genre
superhero
Characters
The Creeper [Jack Ryder]; Batman [Bruce Wayne]; Alfred Pennyworth; Morris Middleman; Shirley Middleman
Synopsis
Journalist Jack Ryder denounces Batman for the murders of Talia and Ra's al Ghul, then goes into action as the Creeper to bring him in. During their fight, the arrival of assassins convinces the Creeper that Batman is being framed for the murders and the heroes agree to expose the scheme together.
Reprints
Keywords
cemeteries; Gotham Park Zoo; television

Part four of a five-part story.
Credits for script, pencils and inks confirmed from Julius Schwartz's editorial records, provided by DC Comics.
Phantom Stranger cameo at bottom of page 2; was supposed to have been in the story but was cut out (all but this cameo).

The Puzzle of the Pyramids (Table of Contents: 4)

Credits for script confirmed from Julius Schwartz's editorial records, provided by DC Comics. The records credit Continuity Studios with the pencils and inks.