The Threat of the Torrid Twosome! (Table of Contents)

Carl Zante known as "The World's Greatest Acrobat" in the story; never actually referred to as "The Acrobat" except on this cover and in the sequel in STRANGE TALES #114 (November 1963). 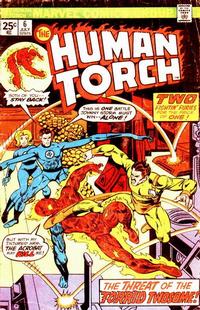 The Threat of the Torrid Twosome (Table of Contents: 1)

Genre
superhero
Characters
Human Torch [Johnny Storm]; Carl Zante [Acrobat] (Intro); Invisible Girl [Sue Storm]; Mr. Fantastic [Reed Richards]; Thing [Ben Grimm]; Miracle Man (flashback); Sub-Mariner (flashback); Dr. Doom (flashback)
Synopsis
Carl Zante, "The world's greatest acrobat," visits Sue, seeking The Human Torch. Johnny wonders how Zante knew his identity; the acrobat tells him everyone knows he is the Torch. Sue explains that Glenville residents left him alone because they assumed he valued his privacy. Zante tries to convince Johnny that he is the FF's most valuable member and persuades him to join him in fighting crime. In actuality Zante only wants Johnny to help him rob a bank. With a little help from his partners Johnny nabs Zante, explaining he suspected Zante all along but wanted to uncover his scheme.
Reprints

Job Number
E-590
Genre
superhero
Characters
Original Human Torch [Jim Hammond]; Toro; Intro: Captain Fred Jory (US Air Force jet pilot); Colonel Frost; Lotty Frost; Villains: The Communists
Synopsis
Air Force pilot Fred Jory nearly crashes his jet into the heart of New York due to an empty fuel tank (and a death-wish) but is saved by The Torch and Toro. Jory reveals he's a coward, and will never be able to marry his girl Lotty, the daughter of Colonel Frost. The Torch promises to help build his confidence up.Later Frost is at the mercy of Communist spies who steal a Super-Jet and kidnap Lotty. The Torch and Jory pursue them and bring both back safely. When the spies strike again Jory lashes out, and only afterwards realizes he's beaten the spies this time without help.
Reprints